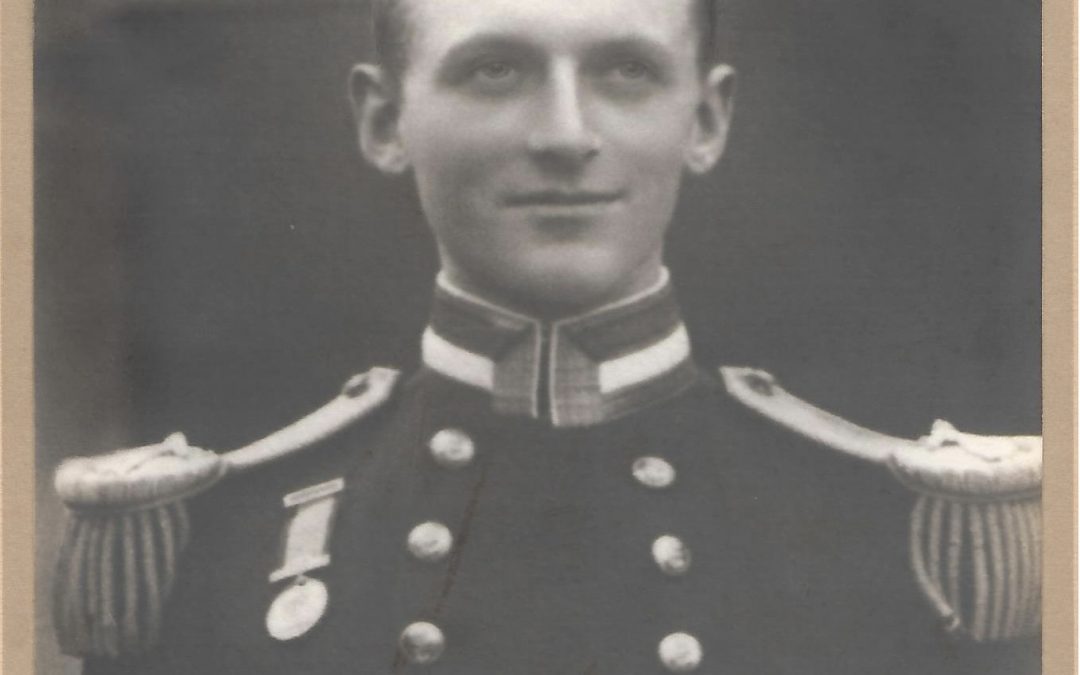 Peter Hutton and his wife and two sons, John and Patrick, lived in St Breward and Patrick’s prep school friends were delighted by the address on Patrick’s weekly letter to his mother:

There is a memorial brass to Peter Coats Hutton over the church door inside St Breward’s Church.

Peter Coats Hutton was born 2 November 1902 and entered the Royal Navy 15 September 1916.  After completing training as a naval cadet he was appointed temporarily on 15 January 1921 as a Midshipman to the cruiser ORION and then in March 1921 to the cruiser RALEIGH.

HMS RALEIGH was later wrecked on the shores of Newfoundland and “in recognition of services in saving life on occasion of wreck of HMS RALEIGH” Hutton was awarded the R.H.S Silver Medal & Certificate and the Stanhope Gold Medal for 1922.*

Hutton obtained First Class passes in all his specialist courses: Seamanship, Navigation and Pilotage, Engineering, Gunnery and Torpedo, for which he was awarded a £10 prize.

On 5 January 1927 his resignation from the Royal Navy was accepted.  Married with two sons, either he was a victim of the Geddes Axe or he recognised that there was little future in a navy being drastically reduced in size.  The family moved to St Breward and Hutton took over Tor Down quarry.

On 11 May1927 he was “Granted permission to join Special Constabulary on clear understanding that Admiralty would have first claim on his services in event of Emergency.”

On 15 December 1932 he was promoted a Lieutenant Commander (Emergency) and recalled to the service on the Emergency List on 26 May 1939.

During the evacuation of Crete in April 1941 Lieutenant Commander Hutton was flown out from England to take command of ‘A’ lighters in the Mediterranean.  Described thus for security reasons, ‘A’ lighters were tank landing craft, but they were sadly ill-equipped for war.  None of them was fitted with wireless and their anti-aircraft armament was either non-existent or very weak.  With their shallow draught and high slab-sided bows they were bitches to handle in harbour and uncomfortable at sea, only in calm weather able to maintain  their maximum speed of ten knots. Their twin 500hp petrol engines made a noise which would alert the enemy from miles away.  These craft were sent to Suda Bay where they arrived on 21st April.

Subsequent operations described in Greek Tragedy ’41 by Anthony Heckstall-Smith and Vice Admiral Baillie-Grohman (published by Blond in 1961) relate the evacuation of the 58,000 Imperial troops from Crete under attack by the Luftwaffe.

On 25th April Hutton went aboard A.15 with the intention of reaching Monemvasia on the Greek mainland in order to assist in the evacuation of ‘X’ beach where 4,320 were embarked.  A.15 never reached Monemvasia.  Somewhere between Suda Bay and the Greek coast she was sunk with the loss of all hands.

*Although not an official award, the medal can be worn on the right chest in uniform by members of the British armed forces.

Where was that cottage?

St Breward History Group was approached via its website by the husband of a lady in poor health – they had been reminiscing about a holiday they had had in a cottage named Venn back in 1985. They thought it was in St Breward and sent a photo of the cottage taken at that time.
No-one in St Breward could identify the cottage, but someone mentioned that they believed there was a cottage by that name in Cardinham. Google said “yes” and gave a postcode, so two brave History Group members crossed the A30 and, following their SATNAV ended up in Mount, on the back road to Trago! Switching the cursed machine off, they followed their noses back to Cardinham and found two knowledgeable members of the community who knew where the cottage was and even who lived there.
The cottage was easily identified and the owner gave permission for up-to-date photos to be taken. These were sent to the holidaying couple forthwith – to much appreciation and delight. 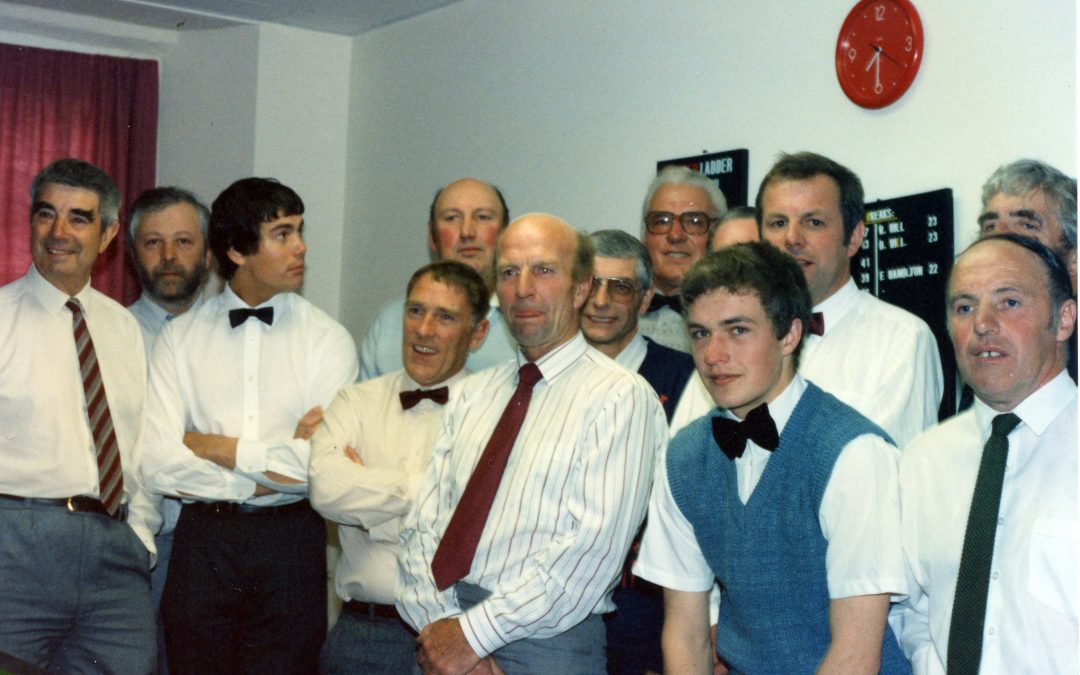 Funds were donated to The Air Ambulance and The Cavitron Fund at Derriford Hospital. 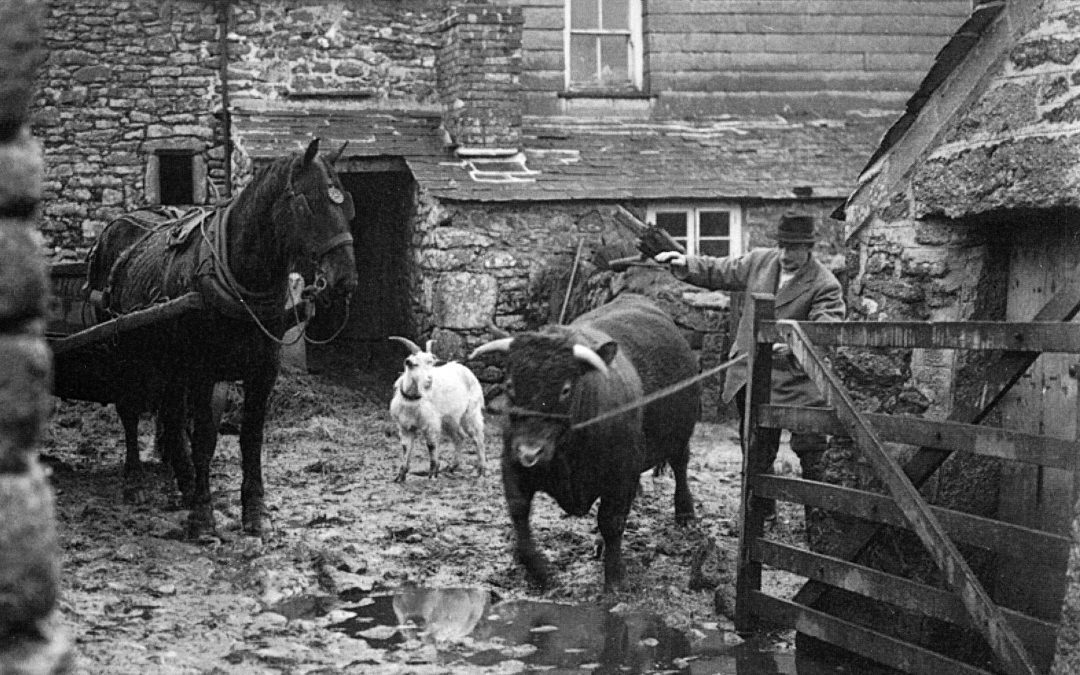 This month’s contribution is courtesy of Florence Walkey, who kindly donated this picture of her farm at Bolatherick.

Florence’s father William John Keast is leading (being led by?) his prize bull across the rain-soaked yard watched by the family goat and pony.

I’d love to know the name of the animals – Over to you Florence? 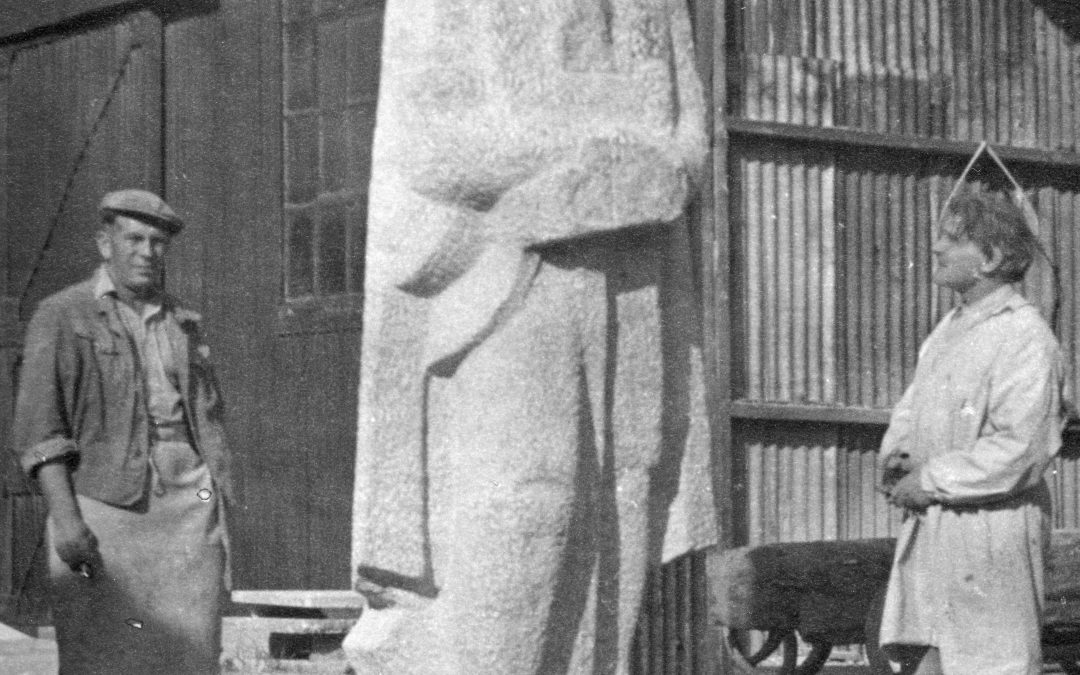 The Statue of Baden-Powell

Lieutenant General Robert Baden-Powell was a British Army officer, writer, and founder of the world-wide Boy Scout Movement. The statue was unveiled by the Duke of Gloucester on 12 July 1961 at Queen’s Gate, London to mark the opening of the new Scout Headquarters.

Donald Potter later acknowledged that it was Ted’s countless hours of help and co-operation that made the carving possible. 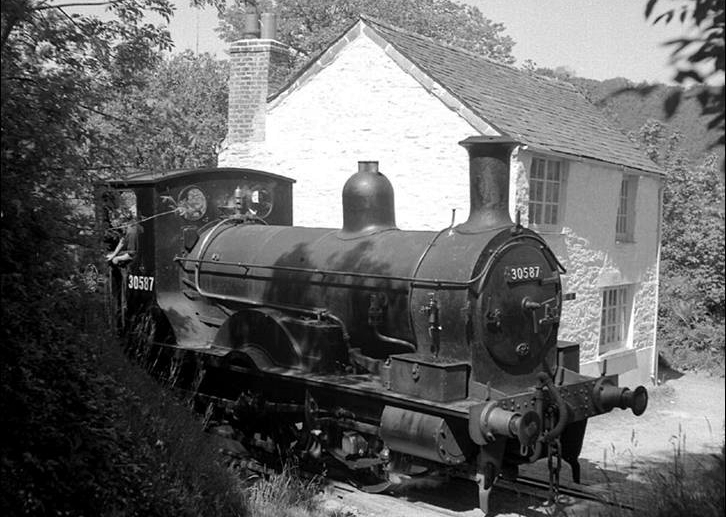 This 1950s photo from Robert Darlaston shows a Beattie Well Tank Locomotive, no 30587, at Helland crossing in the late 1950s.

The Beattie Well Tank is a class of British steam locomotive built between 1863 and 1875 for use on passenger services in the suburbs of London, but later used on rural services in South West England.

If you have any memories or stories of the steam trains working on the Wenford line, please contact the history group so that we may add them to the archive. 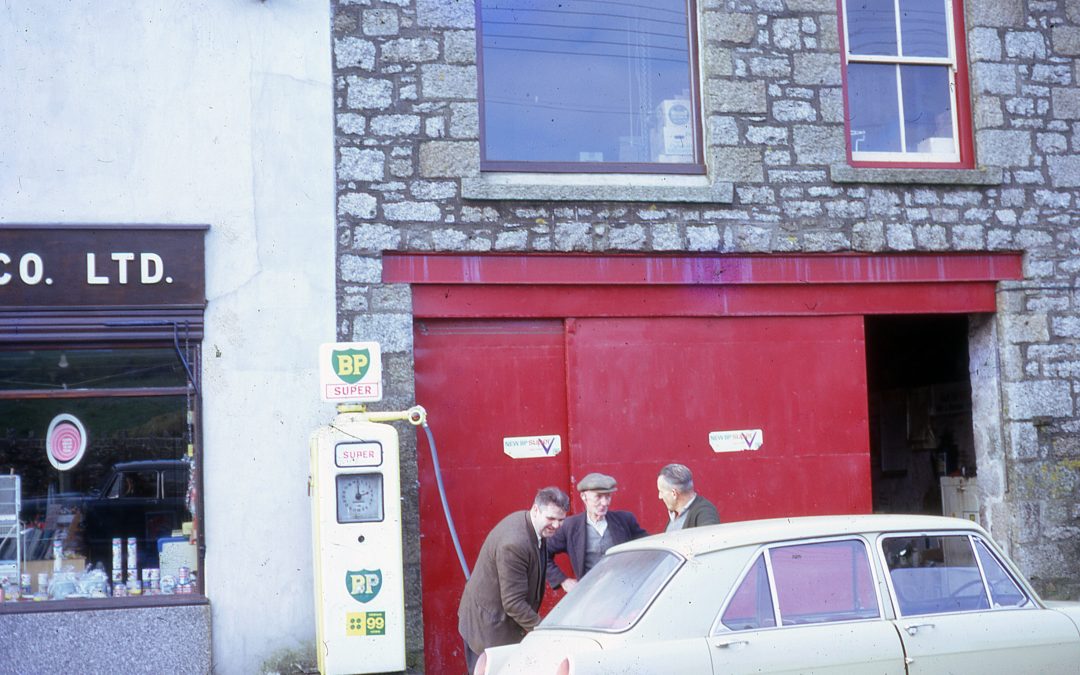 Filling up with a few gallons of 4-Star at Row shop rather than having to drive to Camelford or Bodmin.

Courtesy of Alison Masters, this photo dates from the mid to late 1960s.

If you couldn’t afford a car or a house, you could have bought the Daily Express or a first-class stamp for 5d (2p).

Can you recognise the faces? If you can help, please contact us at enquiries@stbrewardhistory.co.uk. 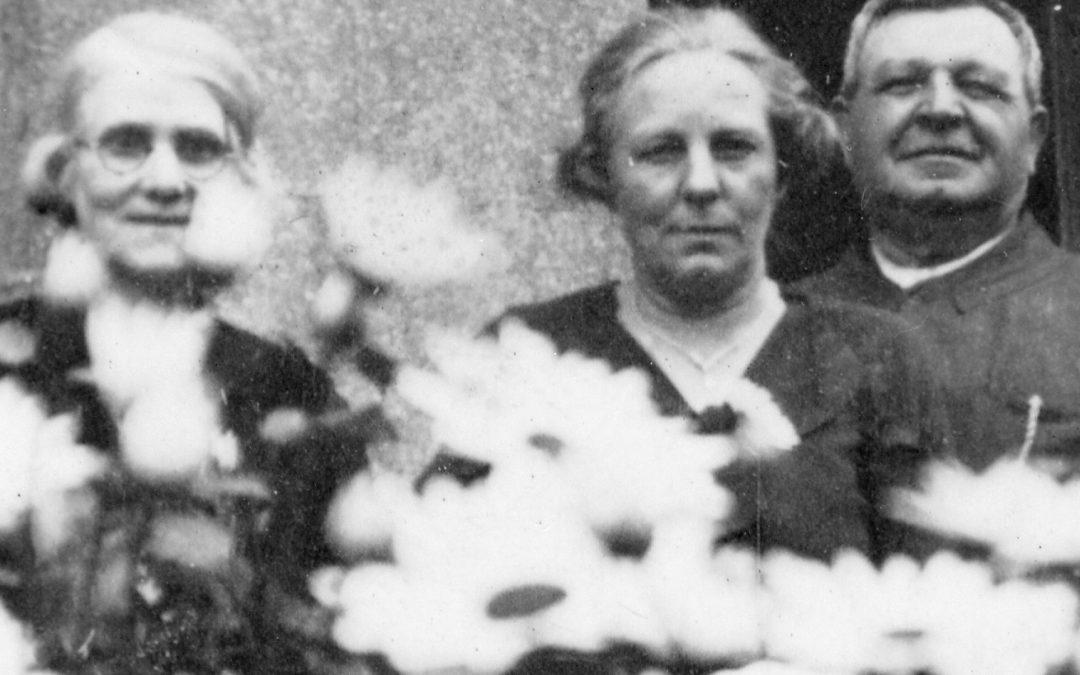 This month’s offering from the archives of the history group is a photo donated some time ago by Mavis Found (nee Reed).

We think it may be a family group, but the only clue is the title ‘Granny Finnemore’ written in pencil on the reverse. Can you see a family resemblance or recognise any of the faces from days gone by?

If you can provide any information, please contact us at enquiries@stbrewardhistory.co.uk. 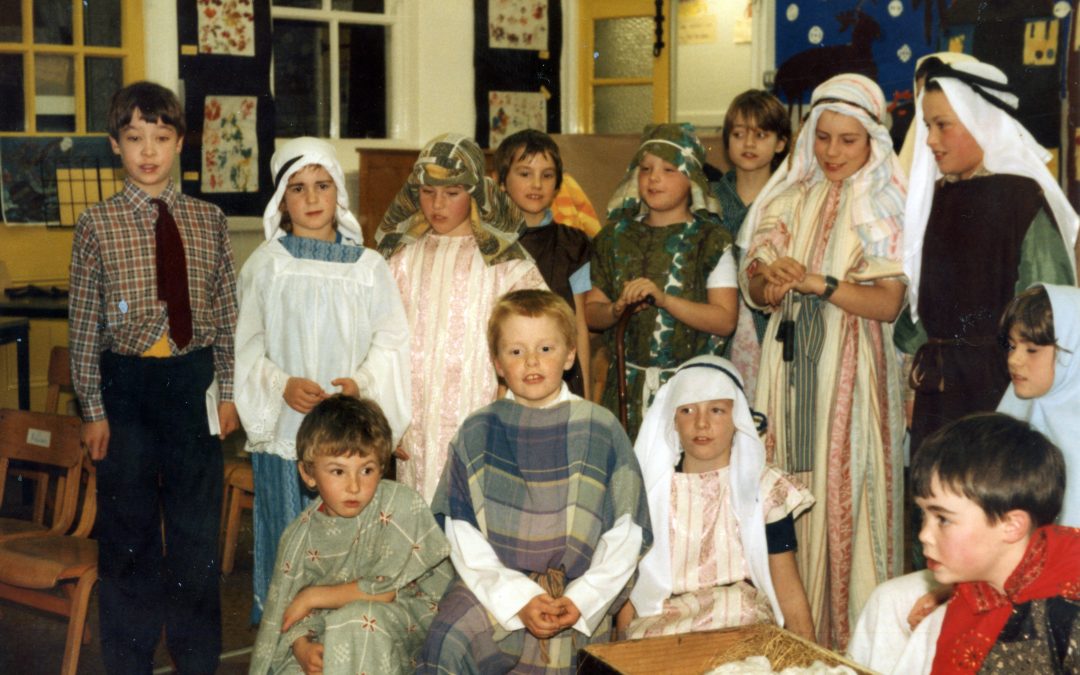 A gathering of fresh-faced shepherds assemble with the three wise men to pay homage to the baby Jesus – 1980s style!  There was obviously no room at the Old Inn, so proud parents Mary and Joseph had to settle for St Breward School.

As usual the history group are relying on our eagle-eyed readers to provide the names and dates to accompany our festive ‘One from the Archives’.

If you can provide any information, please contact us at enquiries@stbrewardhistory.co.uk. 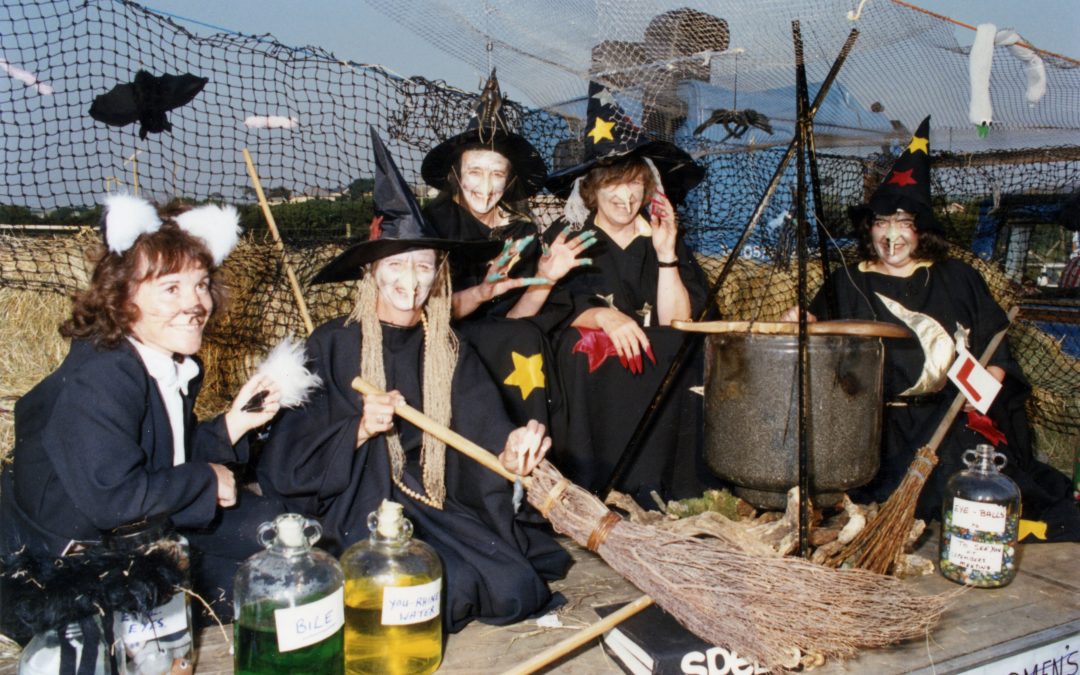 Taking a rest from casting spells and riding broomsticks, the ladies of St Breward W I enjoy a ride on a carnival float in the summer of 1988.  In the picture, (donated to the history group by Margaret Willetts), our motley crew from L-R are: Sue (surname unknown), Jackie Lewis, Margaret Willetts, Mavis Metters and Anne Hole.

If you can provide any extra information, please contact us at enquiries@stbrewardhistory.co.uk.

Exploring and preserving
the history of St Breward